MEET THE HERROLD RESEARCHERS AND AUTHORS 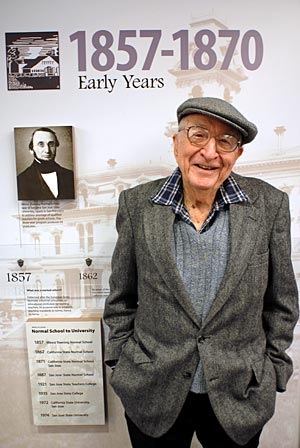 GORDON GREB was a child actor on a  San Francisco radio station at age 12. He studied journalism at the University of California, Berkeley, in admiration of Edward R. Murrow and bought a Sears radio recording machine when war broke out in Europe to preserve shortwave  news on discs. While an undergraduate, he persuaded a local newspaper to sponsor him on one of the Bay Area's first all-local news programs, which helped pay his college tuition. He had to leave it for Army service during World War II but  resumed his newscasting and his B.A. degree program at war's end.
Becoming a station manager a few  years later,  Greb was bothered by sponsors asking, "How many people listen to your station?" So he left radio for graduate studies in journalism and public opinion polling at the University of Minnesota.He combined teaching with work in broadcasting for many years thereafter. His master's thesis, which was a legal argument for freedom of the movies, was cited in the oral argument before the U.S. Supreme Court in the precedent-making decision of Burstyn v. Wilson, et al (l951), which struck down movie censorship. He sought support from Hollywood screenwriters, directors and studio heads, to argue for a first amendment case and got it, including that of Screen Actors Guild President Ronald Reagan.

During his academic career, Greb has taught at San Bernardino Valley College, University of Oregon, University of Minnesota, University of Wisconsin, and Stanford University (while a doctoral candidate). He has lectured at many colleges abroad, including the City University of London, Cambridge University, and Beijing University. Over the years he found time to work as a television and radio newsman for ABC, CBS, and NBC as well as to publish articles in the Journalism Quarterly, the Journal of Broadcasting and magazines like The Writer.  Today an Emeritus Professor from San Jose State University, where in l956 he helped establish the degree program in broadcast journalism, he lives in Jefferson Territory (Mount Shasta and Chico, California).  Greb was honored by the Radio-Television Division of the Association for Education in Journalism in 1994 as a "Distinguished Broadcast Educator." Significantly, Greb discovered Charles Herrold in 1958, and published the seminal article on the subject in the Journal of Broadcasting in 1959. Its editor credited Gordon with having found America's first broadcasting station. E-mail Gordon Greb. Read Author Greb's Column on Herrold

MIKE ADAMS followed his passion for radio to Ohio University at Athens where he had a hard time attending to his undergraduate degree in the l960s because of his love for broadcasting. But enjoying college radio as an announcer and news reporter paid off because Adams had no trouble finding employment as a "top-40" disc jockey during the "golden age" of rock and roll AM radio, spending 12 years as announcer, production director and Program Director of legendary station WCOL-AM in Columbus, Ohio. Finally becoming bored with commercial radio, Adams returned to college and completed his graduate work in film, with an emphasis on social documentaries, at Ohio State University.

Moving to Los Angeles in the 1970's, Adams made documentary films and taught at several universities, among them California State University, Fullerton. Currently, he is professor of radio, television and film, former Chair of the Department of Television, Radio, Film and Theatre at San Jose State University, and currently he serves as the interim associate dean, College of Humanities and the Arts. And he remains in radio, as faculty advisor to his department's FM station, KSJS 90.5.

Mike Adams has presented papers on broadcast history topics at conferences sponsored by the Broadcast Education Association, BEA, the IEEE, and the Antique Wireless Association, AWA, and the Audio Engineering Society, AES. The AWA in 1995 awarded him the prestigious "Houck Award" for historical documentation. Mike is active in the San Francisco Bay Area historical radio community; he is the Board Chairman of the California Historical Radio Society. He has authored numerous articles for historical radio journals and periodicals and two books on radio and television production, the Herrold biography, and he produced an EMMY-nominated video series for PBS called Radio Collector. He is the producer-writer-director of the PBS documentary: Broadcasting's Forgotten Father: the Charles Herrold Story. E-mail Mike Adams His newest book is Lee de Forest, King of Radio, Television, and Film,to be published Fall 2011 by Springer Science+Business. Mike's Web